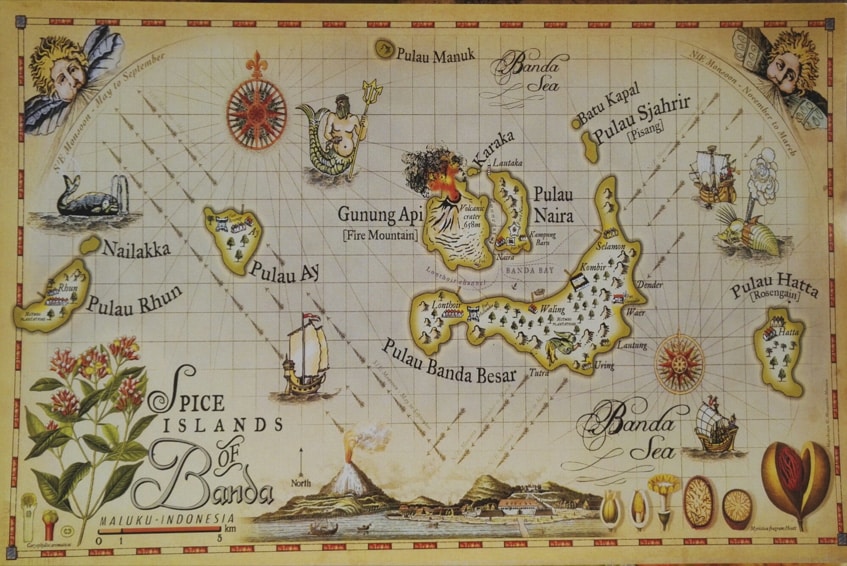 Story of Nutmeg and the Banda Islands

Odd tales from the history of the Banda Islands

Somewhere hidden in the Indonesian archipelago, the top of a volcano surrounded by ten small islets rises above sea level. All around nothing but wind and waves.  Here – and only here on the Banda Islands – grew something that for centuries was worth more than any pirate’s treasure: the nutmeg tree.

After Vasco da Gama had discovered the sea route to India in 1498, the Europeans immediately set out to find the origins of all those treasured spices that promised immeasurable wealth. Nutmeg, cloves and others were known to originate from islands much farther east than India. But where should they look for it? How to find some tiny islets among the seventeen thousand Indonesian islands?

In 1511, the Portuguese conquered the town of Malacca in what is nowadays Malaysia, which was at that time a center of world trade. Here, Malay, Arab, Chinese and Javanese traders met and haggled over the spices of the tropical world. Some captains may have known where the mysterious Bandas were. But such a knowledge would be the most valuable secret of traders. Nobody will tell that to some pale-faced newcomers.

Although the Banda Islands are found on every map nowadays, reaching them was, even for us, more difficult than we had thought. Three attempts were needed until we finally got there a full week behind our schedule.

A speedboat connects Ambon, the capital of the South Moluccas, to Banda Naira, the only major Banda town. First we learned that this was not running, presumably because of engine damage. We then booked a ticket with Susi Air for their next flight at the end of the week. It was March and the rainy season had lasted longer than usual. The night before departure, a thunderstorm swept over Ambon. As a result, we could admired some of the most beautiful cloud formations on our way.

When descencding to Banda Naira, however, we got into strong turbulences which heavily rocked our small plane. The pilot made a steep climb and returned to Ambon.

In the end, the only remaining choice was to board a slow but never failing Pelni ferry.

In 1511, the Portuguese finally discovered the Nutmeg Islands. Years later they returned with an attempt to build a fort but were repelled by hostile Bandanese. Business went better for them in the North Moluccas, where the Sultan of Ternate invited them to his small island which, similar to the Bandas, was then the exclusive source of cloves.

Thus the Portuguese successfully entered the lucrative spice trade as yet another participant, whilst the traditional trade flows continued uninterruptedly. This only changed when in 1599 the captain of a tiny European country anchored at the sound of Banda Naira: a ship of the Dutch East India Company had discovered the Nutmeg Islands.

What is so special about the nutmeg that made sailors risk their lives in the search for that spice?

The trees are rather small and need to grow together with giant almond trees. The leaves of the almond trees form a roof under the shade of which the nutmeg tree flourishes well.

The nut consists of four parts. First an outer fleshy shell, similar to that of a chestnut, which is prepared as jam or candies. Hidden inside a black capsule surrounded by a red layer, mace. Mace is used for dyeing and also as a tasty spice. The actual nutmeg as we know it lies hidden inside the black capsule.

None of this can explain its once amazing value: a 14th-century text states that a pound of nuts is equivalent to “seven fat oxen.”

Surely, exotic spices served as a symbol of status to the rich, who have always been willing to dig deeper into their pockets for such things. The economy of drug trafficking might be another explanation. Nutmegs contain a substance called myristicin which is provenly psychoactive. Finally, the nutmeg may have owed its exorbitant value to a mere rumour: for a long time people believed that the nut is an effective drug against the plague.

For many centuries the spices of Indonesia had been brought to Malacca by Malaysian, Javanese and Buginese merchants (a people of South Sulawesi). Arab merchants then shipped them across the Indian Ocean, and camel trains carried the precious commodities to the coast of the Mediterranean Sea where the Venetian merchants were eagerly waiting. During this long journey the price of nutmeg skyrocketed like cocain in our days.

The Portuguese were able in part to eliminate the chain of intermediate trade and put the surplus in their own pockets. The Dutch East-India Company, however, entertained a plan that went far beyond this: they sought to establish the monopoly of spice trade.

Death has a name in Banda: Jan Pieterszoon Coen. The general manager of the Dutch East India Company and founder of Batavia (now Jakarta) coerced the Bandanese into signing an “eternal contract” which obliged them to sell their nutmegs henceforth exclusively to the Dutch traders at a fixed price. Dutch interests were secured by the construction of several fortresses.

The Bandanese didn’t pay much attention to such letters written on a piece of paper. They kept on, albeit secretly, to sell nutmeg to traders of other nations as well. In 1621, Coen returned his soldiers, among them Japanese samurai mercenaries. And he imposed the death penalty upon 40 leaders of the local nobility for illicit trafficking. Popular resistance was met with merciless brutality. Under Coens command – who for many years was considered a national hero in the Netherlands – thousands of islanders were slaughtered. The figures are not entirely clear, but of the islands’ approximately 15 thousand inhabitants, 14 thousand are said to have been killed or could escape to other islands. The Dutch took over the plantations and managed them with the help of imported slaves.

The monopoly of the Dutch is in a way also a first “victory” of capitalism. From early on the the East India Company had the clever idea to pool the many risks of their ventures. Thus the Company was constituted much like a public limited company whose shares could be bought and sold. In 1602, the Dutch East India Company founded the Amsterdam Stock Exchange, which is still active today.

We stayed several days in Banda Naira and enjoyed the relaxed tranquility of the town. The first sight from the Pelni ferry is the colonial-style Hotel Maulana. Everybody was keen of telling us that Princess Diana once stayed here.

Walking through the small main street, I was overcome with the feeling of a journey through time back to the Dutch East Indies.

The Cilu Bintang estate is another reminiscent of an old colonial villa. Actually we had booked here, but now, after a storm and a week’s delay, our rooms were taken. This was not a big problem, though, because there are many other nice small guest houses in the city.

Later I learned from the owner of the Maulana that his hotel was only built about 30 years ago. And the Cilu Bintang originated but from the imagination of Mr. Abba, its busy owner. However, these insights did not spoil my beatiful nostalgia to the least.

Banda Naira is a quiet and peaceful place. However, there is only one rather unattractive beach on the island. If you want to fully experience the wonderful underwater world of the Banda Sea, you have to cross with one of the public boats to Pulau Hatta. Here, travellers live in bamboo huts on beaches of soft white sand with a coral garden right in front. From the shore it is only about 30 meters to a bold reef. Hatta is certainly one of the best diving and snorkeling paradises in Indonesia.

The story of the Bandas is not yet completely told. An amazing chapter is still to come.

The Dutch were by no means the only ones who seeked to exploit the riches of the Bandas. Shortly after them, the English appeared and settled on the island of Run almost within sight of Banda Naira. The locals were obviously glad that someone came to offer help against the Dutch and signed an agreement in which they recognized the rule of the English King James I over their island. Run was thus the first colony of the English empire. James is said to have been so pleased with this that he proudly changed his title to King of England, Scotland, Wales and Run.

His joy did not last for too long, because a few years later the Dutch fleet attacked the English and forced them to retreat. The battle was won, but the war of the emerging colonial powers continued. The Caribbean, in particular, became their battlefield. Finally, in 1667, the two countries agreed in the Treaty of Breda on mutual recognition of their colonial claims along with the exchange of disputed territories. The island of Run, with its wealth of nutmeg, finally went to the Dutch. In return, the English received a small, swampy river island high up in the cold northern hemisphere called New Amsterdam – which they quickly renamed as New York.

We also planned to visit Run This, however, almost ended in disaster. Once again, a  nocturnal thunderstorm had swept the islands. When in the morning our small boat left the protective sound of Banda Naira, it was rocked back and forth by menacing waves. The women screamed, the men scooped water out of the boat with all their strength, which nevertheless threatened to overfill, one man went overboard (and was luckily recovered). Eventually the skipper was able to make a carefull turn and we finally reached the save harbour of Banda Naira, albeit completely soaked with salty water.

What was the final fate of the nutmeg?

It remained the exclusive wealth of the Bandas for another hundred years, although this was now enjoyed by foreign Europeans. Finally, in 1769 a Frenchman named Pierre Poivre managed to smuggle some seeds and seedlings unnoticed by the watchful eyes of the Dutch guards. Subsequently, he successfully planted the trees on the tropical island of Mauritus.

The Dutch East India Company had lost its monopoly at last.

Please note that this text is not the summary of a historical research. All sources were found in the Internet and may not be reliable in every detail.

Further reading: The Dutch Conquest of the Banda Islands by Kees Klok.

See more of my images from the Banda Islands on Flickr

Hi, Collin.
Your photos and writing are amazingly relaxing. Thank you for that.
I have a question. Can I use it for my ASMR video in Youtube?
If I can, it would be much thankful.. I will show you as a reference in the explanation space in the video.
Also, keep up the good work!!

Hello, thanks for visiting my site. Please use my Contact page under “About” und send me some details of your request.

I just get to know that my stay hotel was once visited by Diana -:)

Did you notice her portrait on the terrace? :))

Hi Collin
I found this on FB. Because of my interest for foreign countries and enlagrement of my English skills I read it all. Many new information, I didn’t know before. Thanks for that.
Best regards
Manfred

Thanks for looking in, Manfred. Glad to see you here.