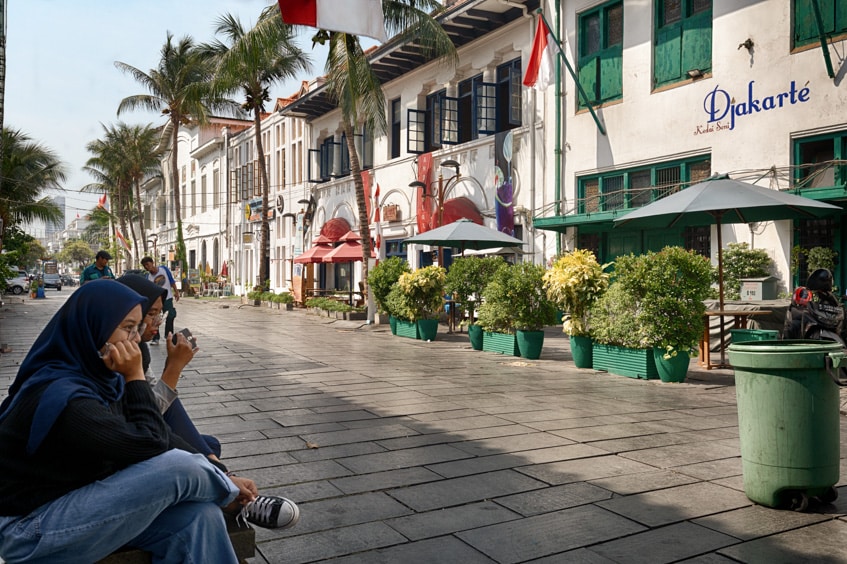 In 1619 the Dutch East India Company established a trade post at the mouth of a small river called Ciliwung on Java’s north coast. They named the place Batavia. Today this is the part of Jakarta that is referred to as Kota Tua (Old Town). Let me take you on a little tour through this area of Dutch colonial reminiscence.

When the Portuguese arrived in 1522, the mouth of Ciliwung river was a bustling port named Sunda Kelapa (Coconut of Sunda), ruled by the Hindu kingdom of Sunda. 1527 the city was conquered by the troops of two Muslim Sultanates under the command of Fatahillah. The Portuguese were expelled, and the place named Jayakarta (Victorious City).

The early 17th century saw the arrival of Dutch and English traders who both established warehouses at the place. Tensions grew into a war, and in 1619 Dutch commander Jan Pieterszoon Coen with the backing of the Sultanate of Banten attacked Jayakarta and burned it to the ground. Subsequently, the Dutch founded a new town which they called Batavia. It later became the capital of the Dutch East Indies colony.

When you leave the Jakarta Kota station, you are welcomed by an armada of green clad ojek drivers waiting for customers. From there it is about 100 meter down the street to Fatahillah Square, the center of Kota Tua.

The square is lined by neatly renovated buildings, some of them housing museums. The Sejarah Jakarta (History Museum) is situated on the south side, neighbored by the Wayang (Puppet) Museum. Gaudy bicycles with sunhats in matching colours are awaiting the tourists. As I arrived on a Monday morning, all the museums were closed. As an advantage, though, I was thus pretty much the only foreigner and you will not see crowds of tourists in my photos.

In the north-west corner of Fatahillah square the colonial style Café Batavia is a beautiful place to relax from the heat and enjoy a fine meal (if you can afford the rather high prizes of this establishment).

On the opposite bank of the Kali Krukut canal I spotted a very picturesque phantasy style building. Somebody said the style is Balinese but I really can’t tell. I could not find the house on Google maps so I assume it is a rather recent construction.

Not far from there stands one of the oldest houses of Jakarta, the Toko Merah (Red Shop) built in 1730. I must apologize for not having a guidebook with me, thus I wasn’t aware of that historical fact – and now I can show you only half of the Toko Merah!

Many historic buildings of Kora Tua, however, are not in a good condition. When you just turn around the corner of Fatahillah square, you will find houses like the one below.

The decline of Batavia began during the 18th century. One problem was the health-situation which worsened probably due to the foul water of the canals in combination with the hot and humid climate. Outbreaks of tropical diseases like malaria threatened the people. Those who could afford it, moved to a newly founded estate to the south named Weltevreden (roughly todays Sawah Besar and Gambir subdistricts). Batavia fell into decay.

Authorities agreed on a plan to revitalize the Old Town in 2004. It gained momentum under Governor Joko Widodo in 2014, when sixteen historic buildings were restored. But a lot more must be done, as becomes the more obvious the farther you walk away from the central Fatahillah square.

The ancient port of the Sunda kingdom’s city of Jayakarta regained its name after independence. Even though it lost its importance after the construction of the new Tanjung Priok harbor in 1885, the Sunda Kelapa harbor is in use even today. You will find it walking north from the Kota Intan drawbridge along the Jalan Tongkol, a street busy with tent makers and other workshops.

Sunda Kelapa is nowadays the pier for the Indonesian Pinisi ships. These ancient types of boats reigned the seas of the archipelago before the advent of the colonial powers. They are still being constructed on the beaches around Bira in South Sulawesi by the expert builders of the local Bugis people.

At Sunda Kelapa they assemble in an impressive row of boats, proving their usefulness even today.

Along the railroad tracks between Kota Tua and Sunda Kelapa, there is a line of slums where people live in heartbreaking conditions. Even though I shot some of the above photos right next to the slum, I did not notice it as the dwellings are very well hidden from view.

Next day, though, I went right there with the Jakarta Hidden Tour which is designed to create awareness by bringing visitors to the slums. You can read about this experience on my previous blog post.