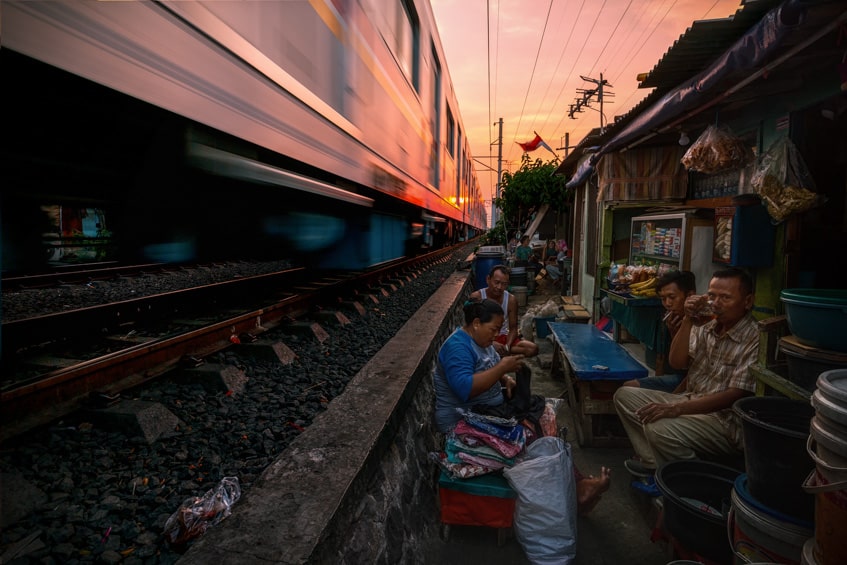 If you visit Jakarta, you can book a city tour which is probably totally different from any other tour you have been on before. It is offered by Ronny Poluan and his wife Anneke Rompas. They call it Jakarta Hidden Tour because they will guide you to places unseen in guidebooks and tourist promotions: the slums.

Poverty as a touristic destination? Understandably a deterring thought for many visitors. Nobody wants to feel like a voyeur of misery. But you won’t be. To put it in Ronnie’s words: “You are not our tourist, you are our participant in the 3E development Project.” Where 3E stands for emergency, education, empowerment. Thus the 50 USD one must pay for the tour is regarded as a donation to the project and the people.

Our tour took about two to three hours and left me with a lot of contrary impressions. I felt elated by the beauty and kindness of the people living in conditions that are more than depressing.

Such a short excursion is not enough to derive at any founded conclusions. Thus, I will not even try to offer a coherent text for this blog but rather offer glimpses and fragments from the slums of Jakarta.

The first place we visit is one of the many slums at the edge of the harbor, just opposite a quarter of fancy modern office towers, costly apartment buildings and a neat school for children whose parents can afford it.

I feel uneasy about this and other photos – because I find it beautiful. But then, who says there is not beauty in poverty? The image, however, can’t convey the stingy smell of the place. Nor any other pain.

Ronny Poluan is not, as I had assumed, a social worker but an artist. So, before we even start on the tour, we talk about how art can relate to poverty. “We once did a photo exposition about the slums. Wonderful black&white images of high intensity” Ronny says. “But I had an uneasy feeling. The people’s misery had become something aesthetical.”

But look at the man who draws nails from used timber planks. Is the human face not beautiful everywhere – like a lotus flower even though it grows in the mud?

I find the place busy with people trying to earn some money in any imaginable way. One guy has padded the luggage rack of his old bicycle. He waits for customers who want to be taken to places, nowadays mostly in vain, as he says: “Since the Gojek motorbikes (an Indonesian version of Uber) offer their cheap service, nobody wants to make use of my bike anymore.”

Using a bike as mobile restaurant is probably a better business model nowadays.

But not everybody finds work every day. When they don’t, young men gather in their “club house” to smoke, drink tea and chat. The “club” is but a wooden shelter with an old sofa and an even older mattress.

Ronny talks with the men about community affairs, when one man comes up giving an ardent speech. I can’t follow the topic, but assume it is political.  Maybe I am prejudiced by his gestures, the Che-Guevarra-shirt and the barbed wire tattoo around his neck.

As we enter the slum, children come running to join us on the tour. Ronny and Anneke know almost each one of them by name. They organize English classes for the children as part of the second E – education. Thus, each of the kids also introduces itself to me using the English phrases they have learned in these classes.

“Lately a colleague, another artist, called me and asked ‘Ronny, what are you now, an artist or an activist?’” It is not clear to me if Ronny is amused or rather annoyed by this question. What is art if it is void of compassion?

The first thing Ronny and Anneke showed me was the view of the slums from the other, the rich side of the harbor shore. This is how the slums are usually viewed – from a safe distance. People know that poverty is there, yet it is barely visible. It becomes an abstract problem. That is what is meant by ‘hidden’.

Ronny and Anneke help people to meet. This won’t change the world. But at least people will be more than abstract problems to each other. And after all, isn’t it only natural for people to meet? Indeed, it seems even more natural for the resident people than for most tourists. “I treat them as my guests,” says an old slum dweller into the microphones of a CNN camera on one of the tours, “and I believe they would do the same to me.”

Most welcoming, as always, are the kids. They love to chat using the little English they have learned and show their visitors around.

The next place we visit is a reform project. A dusty open square with small houses surrounding it. It looks neat compared to the slum before, yet also somewhat deserted.

A lot of colorful flags have been erected, a weak attempt, so it seems, to submit some feeling of joyfulness. “Once 400 families used to live at this place,” Ronny explains, “then the government demolished the slum.” Only about 100 families remained moving into the new sheds provided by the city. “The others were displaced.” It’s a disaster for those who can’t stay. There has been resistance against the demolition. As obvious, to no avail.

The city is pushing ahead social housing projects. “Under the rule of (now president) Widodo as mayor the city’s poor people have seen two highly beneficial improvements,” says Ronny. “Free schools and medical aid for everybody.” There is a catch, though: this holds only for those whose ID card proves them to be residents of Jakarta. A vast number, however, are not, even though they might have lived in the city for decades. Can’t they get ID cards? “Yes,” Ronny answers, “if they have a legal residence in town.” Most slum houses, of course, are not legal.

The man sings karaoke inside his home. A speaker outside the door makes it an entertainment for the neighbours, too.

While Ronny takes a rest, Anneke shows me around the quarter. At every door she talks with the people, and I see her handing some Rupiah notes to an old man who tells her about his current problems. The houses looked much more solid from a distance. Up close they are just thin wooden walls under a common tin roof that encloses small rooms with no ceiling. People have even less privacy here than in the former slum dwellings.

From the wall which confines the quarter one can see high rising social welfare housing. The government has promised to build such a building on the dusty central square of the demolished slum quarter. All families must pay a small monthly fee for the project, though nobody knows how long it may take to be realized.

The wall, however, has already been decorated with jolly sea life paintings.

The quarter at the harbor was busy and vivid, the reform project offered at least a glimpse of hope for a better future. The last place that Ronny and Anneke show me, however, sends a shiver down my spine.

At Kota Tua, the historic center and tourist highlight of Jakarta, we enter a narrow and gloomy hallway between two houses. At the end of it we walk up a ramp and stand beside the railway tracks.

Across the tracks people are housing in decrepit shacks. The sun is just about to set. Eager to catch the moment I raise my camera, when people shoo me from the track bed as a train is appearing fast from behind.

We climb down a few steps and stand in a cave. People live below the tracks in coves reaching into the groundwork of the railroad. This is the kitchen of the place.

A gloomy path with a small gully connects the coves. At it’s end it leads outside to the banks of a stinking river.

A young couple opens their shed for us to look inside. Their floor is covered by one mattress which fills the whole space, while they watch some show on a TV screen on the wall.

I don’t take a photo; it is too dark. Or is it rather that I am too ashamed as to intrude into that tiny bit of privacy of this couple? They smile. It is not the people here that are ashamed but rather us, the visitors. Yet again, it is the conditions that are eerie, while the people are wonderful. As Ronny stated in a documentary: “I love to see how the people manage to survive, how tough they are, and how peaceful their mind is.”

After a while of watching and chatting with the people we climb out of the cave and stand on a bridge that spans the slum dwellings. And I recognize the place. I was here yesterday when photographing the adjacent historic draw bridge, one of the touristic highlights of Jakarta’s Kota Tua. While doing so I was literally standing above the heads of the poor people, the hidden reality of this town.

A very fine short movie about the tour by Ulf Krueger.

Cost of the tour: 50 USD donation to their projects per person