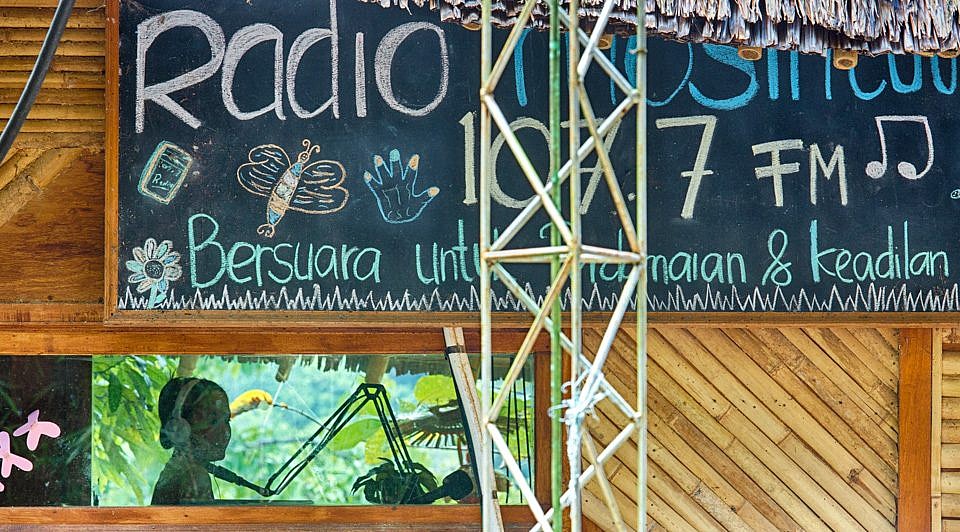 Walking together through the conflict zone

For most travelers Tentena is but a short break from the arduous bus-ride from Tana Toraja to the Togian Islands. If you are there, though, don’t miss out on visiting the “Dodoha Mosintuwu” institute and restaurant/café. Founded by renowned feminist and peace activist Lian Gogali, the center is a true architectural gem, snuggled behind trees and tall reeds against the shore of Lake Poso. A perfect place to relax, or to gain a deeper understanding of the social conflicts hidden beneath the surface of this idyllic part of Sulawesi; or both.

In 1998 and again 2000 Tentena faced severe conflict between Muslim and Christian religious groups. The center of these riots was Poso, the district capital 50 kilometers away. One thousand or more people were killed during the clashes. Many Christian families from Poso left their homes and fled to Tentena, while Muslims escaped in the opposite direction. The Poso regency was officially declared a conflict zone. What most visitors don’t know: the area bears that label even today.

At first attempt we missed it. The entrance to Mosintuwu Institute is marked by a nondescript bamboo gate with some small signposts. The place was not mentioned in our Lonely Planet but we had copied a few pages from the Sulawesi Guide of Indojunkie. They mentioned some institute run by a feminist activist named Lian Gogali on their Tentena section, so we walked through town looking for any indication of such a site. In fact, it is also marked on Google Maps.

At first, however, we just walked by the gate, taking this to be the entrance to some vegetable fields. On our way back, we tried it out and walked down the dirt track. At its end we were really taken by surprise: Unexpectedly, we stood in front of a large bamboo structure, a house of bewildering artistic forms. Next to it was a smaller house with a large, narrow window, behind which I recognized the silhouette of a young woman wearing headphones (top image). “Radio Mosintuwu” proclaimed some large sign with colourful merry letters.

The young woman introduced herself as Susan, a Mosintuwu volunteer.  Learning that we had stepped into this place totally ignorant yet full of curiosity, she kindly offered to show us around and answer any questions we had. With a smile she opened the door to the radio station.

A young, blond haired girl signaled us to enter the broadcasting room flooded with bright warm light, while some rhythmical song was playing. She sat bare-foot behind a table covered with computers, technical stuff, lots of cables, the walls covered kindergarten-style with paintings of flowers and balloons in bright colours. She gave us a sign to keep quiet as she set in for a voice message. When the music continued, she gladly posed for some photos.

Next Susan led us into the main building. Later I learned that it  was built in the form of a fish, but this can only be noticed from some distance. Up close it just looked like a staggering chaos of bamboo poles rising high, coming down again, bending in every direction. More like a walk-in piece of art than an ordinary house.

The ‘head’ of the fish houses a café and restaurant open for everybody. Its ‘mouth’ opens towards the lake. And if fish had tongues, this would be the jetty leading far out to a pavilion above deeper water.

We ordered a pot of tea while Susan answered our questions. Besides her she told us  there are six other volunteers working at the institute plus three in charge of the radio programme. All but three of the workers arefemale. Then, she explained to us the meaning of the name of the place and organization: “Mosintuwu” in local Pamona language means ‘we walk together’. This term puts all the efforts of the institute in a nutshell: walking together, through a zone of conflict, thus finding the path to peaceMeeting Lian Gogali

“Maybe you should meet Lian,” Susan suggested, “she can tell you much more about this than I can.”

As Lian approaches us next morning we are astounded by two seemingly contradictory impressions. On the one hand, the air of high energy that surrounds this small woman, on the other, the fact that she is handicapped – due to a motorcycle accident years ago she has to walk on a crutch.

Lian was born in a small Christian village near Poso. In 1997 she left home to study theology in Yogyakarta. Returning home in 1999 for the funeral of her father, she found Poso in ruins after the first outburst of the Muslim vs. Christian riots. People from her family had died, the house of her sister had been burnt down.

These terrible impressions brought about a change to Lian’s academical endeavor. More and more she became interested in the question of how religion could be abused in political conflict. Back in Yogyakarta she turned to social studies.

By 2002 Poso district was crowded with people from both religions, Christian and Muslim, that had lost their homes. Jihadists had poured into the area, further heating up the conflict. Lian returned to do research within camps of displaced people for her university thesis. Despite all the atrocities, she was impressed by many accounts of people – mostly women – who had overcome the hatred and helped their neighbors of different faith to survive.

“When I was about to leave the camp to finish my paper in Yogya,” Lian remembers, “a woman approached me and asked: ‘And what will you do now?’ ”

“I will publish a book for the world to know.” Lian answered. The woman looked at her. “And we will stay back here,” she retorted, “where nothing will change.”

This short encounter was her key moment, Lian tells us. It made her shed an academic life for that of an activist, dedicated to support the peace efforts in Poso. But returning to her homeland was extremely difficult for her, as she was a single mother of a girl by then, and her family back there did not even know. She declined the proposal to have her older sister adopt her daughter and, defying the resistance of a strictly traditional society, Lian brought up Sophia on her own, without being married.

In 2008 Lian founded the Mosintuwu institute. From the beginning it was dedicated to the education of women, because “women in Poso are the most untapped resource for religious tolerance and peace.”* Since then, the activities of Mosintuwu are too diverse to mention them all. Women are taught their rights and how to express themselves when facing the male dominated village councils. They are supported in setting up small scale enterprises. The institute organizes interreligious dialogue, houses a children’s library and also offers safe housing for women in danger.

“How much resistance do you face, challenging traditional concepts and male dominance,” I ask. “Of course, people trying to retain their privileges do react unfriendly,” Lian exclaims. “Lately I have been labeled ‘secessionist’ in Jakarta” she shrugs.

Saying someone is a secessionist is quite a severe accusation in multi-ethnic, multi-cultured Indonesia.

When, in 2012, Lian won the Coexist Prize from the British Coexist Foundation, she invested the money in the artistic bamboo center that gave her Institute a home.

Next to the center, she built another unusually styled bamboo house, which serves as home to her and Sophia but also offers rooms for visitors. “I want to establish ecological tourism in Tentena,” she explains with a sporting smile.

Fight of the Fishermen

Then Lian surprises us with another unsuspected change of subject: “At the moment we are supporting the local people who fight against the dam.”

“Yes,” she replies. “Haven’t you heard of it? The government plans to dam the Poso river. In consequence, the traditional fish traps will be removed. The politicians and investors promise they will construct some fancy water-wonderland, but in the end the families operating the traps will be bereft of their livelihood and Tentena will lose a part of its spirit. You have certainly seen the traps, have you?”

Of course we have. The bamboo traps spun across the river from one shore to the other are the most peculiar sight of Tentena. Though at first sight we were not sure about the purpose of these constructions.

An hour later Lian has organized the trip. In spite of her handicap, she joins us into the small and shaky boat to the traps, where one of the fishermen  already awaits us to explain their traditional method of catching eel. Even a camera man has joined in and, all of a sudden, we find ourselves being part of a campaign in support of Sulawesi fishermen.

Before we ride back to Mosintuwu Lian makes us change roles and asks us for a short interview. Just one question: “Why do you come to visit Tentena?” “Well,” I search for words facing the camera, “for the natural beauty, of course. And to experience some of the real life and culture. Like everyone else we could have gone to Bali to be entertained. But real Indonesia we will find here.”

I notice a broad smile on Lian’s face behind the camera man. Obviously, she feels reaffirmed by what I said. Just a tiny word of support. But Lian welcomes any bit of support she can get for her goal of a peaceful and just future of Indonesia.

*Quote from an interview with the Berkley Center, see below for the link.

Dodoha Mosintuwu offers three double rooms for tourists. I saw that one can be rented through AirBnB  for 16 Euro, roughly equivalent to 250k IRP.

A detailed story about Lian was published by Devi Asmarani in the online issue of “Magdalene”: Devi Asmarani’s story

“When the war ends, a woman’s fight begins” is a long documentary film on Lian Gogali’s campaign by Sue Useem: Sue Useem’s documentary

Other worthwhile destinations around Tentena: Saluopa waterfalls and Hindu villages

After a bike-ride of about half an hour and a short walk you will reach the waterfalls.

On the way to the falls you will pass a Hindu village.

Excursions to Lore Lindu National Park, the Bada Valley and the ancient megaliths

The people from Mosintuwu can help to arrange these excursions. They work together with Agus Tohama, an experienced guide and native of the Bada Valley. Even walks across the mountains to the adjacent valley and from there to Palu are possible, with one night sleeping in the jungle.