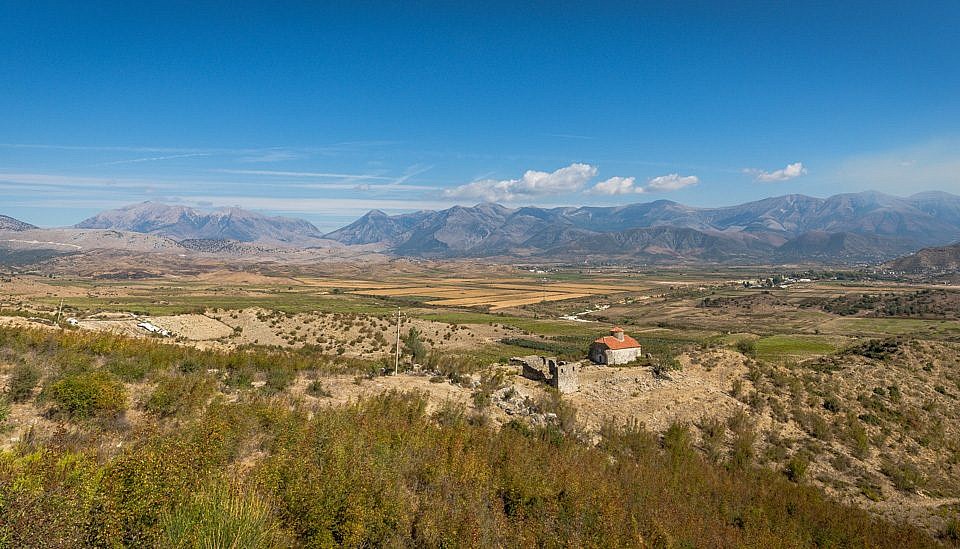 Where the eagles fly

?? – Questionmarks lit up in the eyes of everybody I informed that Albania will be our next destination. Albania, where? Can you travel there freely? Ain’t it dangerous to do so? To answer two of these questions right away: Yes, you can travel freely, EU citizens don’t even need a visa. And no, it is not dangerious to travel in Albania. People are friendly and streets are as safe as at home.

Though Albania has a long history, it has somehow always found itself at the periphery of history. It began with the pre-roman Illyrian tribes. Roman rule followed, Byzantine dominion, the Ottomans who brought the Muslim religion to the country. It was not before the 20th century that the Albanians were able to found their first own state. Soon later they fell prey to the most stalinistic communist regime of Europe. Party leader and dictator Enver Hoxha sealed the country off from all the surrounding world. Even the socialist neighbours were considered to be hostile powers.

Albania is one of three European countries with a Muslim majority. After many years under communist rule, though, religion does not play a dominant role in society any more. 1967 Albania was even declared the world’s first atheistic state. With the political freedom, however, religious activities gained ground. Many mosques and churches have been newly built or renovated.

Albania, where? Considering the recent history the question might not come as such a surprise. North of Greece at the Adriatic coast, part of the wild and beautiful Balkan Mountains. The country’s official name is Republika e Shqipërisë, derived from the word shqiponjë, eagle. The “double eagle” is the countries official emblem.

We rent a car at the airport and drove off to see as much of the country’s sights as possible within two weeks. In fact you can do so and see it all. Most roads are pretty well to drive (with some exceptions). Albanian drivers had a quite “defensive” style which made it all the more relaxed for us. However, I would not recommend to travel in a rush as we did. Rather come here twice and discover the northern part at one time and the southern the next time. It will be much more rewarding.

Thus the recent post can’t give any in-depth insights, but rather I will offer some glimpses into this beautiful country, hoping to raise your interest.

The village of Valbonë lies in the far north eastern corner of the country. The area is called “Albanian Alps” for obvious reasons, as you can see in my photo. Valbonë offers a growing number of decent accomodation. Most people come here to hike. A main route reaches the village of Theth in the next valley across the high peaks. There is no road connection between both places. If your time is short you will have to consider either one valley or the other. We opted for Valbonë, because the road there is easy to drive. Visiting Theth you need a four-wheeler for the last part of the way. But there are service cars that will bring you there for a little price.

A very rewarding way to approach Valbonë is by taking the car ferry along Lake Koman reservoir before actually entering the valley. Access to the southern ferry port is a bit bumpy. And better try to reserve a place on the boat before you go.

Lake Ohrid is Macedonias largest lake. The western part, however, belongs to Albania. It is almost 300 meters deep – and old. Very old. At least one million years old, some even say five. For sure it is the oldest lake in Europe holding many endemic species. Animals that live only here and nowhere else. You will not see them unless you are a diver. But there is a definite air of grandeur to the lake, even from above.

A very relaxed place to enjoy the beauty of Lake Ohrid is the small village of Lin. A hotel with parking place and a nice lake terrace marks the entrance to the village. From here you should first enter by foot as the only street of the village is rather small. Soon one reaches Rosa’s Home, a picturesque and friendly private accomodation on shore of the lake. I guess that Rosa was the first to shelter travellers here, but meanwhile both of her neighbours offer rooms as well. All three pensions are worth to be considered.

If you plan to reach Lake Ohrid from the north on the route from Peshkopi via Librazhd, be aware that you have to master one of the unpaved and difficult roads of Albania. You can do it (in dry season!) without a four-wheeler – we met people who did so. But it is a tiresome journey. The alternative is to drive part way through Macedonia – on a paved and very well maintained road. Don’t worry if you don’t have the green insurance card for your hire car. You will get that at border crossing without problem (though not without money, of course).

One of the cities I really found worth visiting is Korça. Even though, to my taste, somehow ‘over-renovated’, the old city quarters lend themselves for a nice stroll. Some of the market stands are really picturesque.

The city is also the home of some famous churches and the Mirahore Mosque, the second oldest mosque of the country. Not so spectacular from the outside, you have to enter to inhale its history. Don’t worry – all mosques I have seen are very friendly places – for men and women alike.

To Gjirokastër via the valley of River Vjosa

The road from Korça to UNESCO World Heritage city Gjirokastër curls south through sparsely inhabitated landscapes, always close to the Greek border. As you reach the river Vjosa a high mountain range blocks the direct route and forces the traveler to turn north-west and ride a long way along the river. This turns out to be a most beautiful ride. The River Vjosa is one of the last European wild and untamed rivers – though the biodiversity of this unique ecosystem is highly endangered by hydropower projects.

Gjirokastër is one of the old cities of Albania known for its beautiful traditional houses with stone tiled roofs.

Up from the castle you have wonderful views over the city towards the adjacent mountain range to the north.

Above I spoke of Albania’s long history – Butrint has seen it all! The ruined city situated at the southern end of so-called “Albanian Riviera” is a wonderful place to visit even for people who usually would not want to visit archeological sites. Walk below the high trees of forested Butrint peninsula, surrounded by a lagoon, and you will inhale history.

To really enjoy the visit make sure to be there early. Morning light evokes the magic of this place. This special aura will soon be gone as busloads of tourists pour in, many coming over for a day trip from the nearby Greek vacation island of Korfu. If you don’t need a beach across your hotel, you may consider to stay in the atmospheric Hotel Livia next to the entrance of the site.

North of Butrint there is the once small and relaxed village of Ksamil. Beach tourism is growing at an extreme pace. The Ksamil of today is crowded with hotels and appartments. Even more crowded is the neighbouring city of Saranda. I am sure that most parts of the Albanian coast will soon not be distinguishable any more from any other ugly Mediterranean tourist beach.

From Butrint, though, a small car ferry can set you over the outlet of the lagoon and you are ready for a day trip to a totally different world. A valley covered by orchards and villages without any bustle extends all the way south to the Greek border.

Here you may join the men in a bar sitting idle drinking their coffee.

It is clear from what I said above that I am not a friend of coastal tourism in Southern Europe. Yet Albania does offer some lovely beaches off from the tourist rush.

The larger places, however, are covered with fast built high rising apartment blocks.

The city of Durrës is one of these cities that have changed incredibly during the past years. And no sin has been left out, though the freshly renovated city centre is not without charme.

Situated close to the Tirana airport, however, Durrës may serve as the starting point for any trip to Albania. If so, don’t forget to visit some of the ancient monuments of this historical city. Like the huge Roman amphitheater right in the center of town, which had been forgotten for ages and was re-discoverd accidentially only in the 20th century.

See more of my images from Albania on Flickr

I guess Abania suffered a really bad earthquake. I read about it on the news. It sounds like the death tole is currently at 23. I can only imagine how horrible that would be… Apparently it was 6.4 magnitude. That’s really strong.

Yes Sharee, the quake was quite strong. Fortunately our friends in Durres stayed safe, but houses collapsed and people died.

I like the pictures, the mountain looks as a curtain.

Thank you my friend!